Well, I made the cake. And then I went away for the weekend to see the Fall Fair on Salt Spring and show my grandmother my wedding dress. Then, the AC flight attendants threatened to strike, so I ended up flying to Toronto on Monday, a week early, for our wedding BBQ. I am amazingly grateful for my life and our travel benefits, but honestly... I'm really, really happy to be home. I've spent too much time away lately, it seems. (At least this trip didn't involve bears, though... unlike the one before it! But that's a story for another day.)

Anyway. Cake. Making this cake made me realize... I don't know fuck all about making cake. I got to the part where it was telling me to whip the egg whites into stiff peaks and I'm all... I don't actually know how to recognize stiff peaks. And then, I had the mixer set too fast and somehow blew straight past what I understand stiff peaks to mean and straight to something resembling styrofoam, which actually broke in half when I lifted the whipper thing. Oops! Then, to make matters worse, I suspect that I over-mixed the styrofoam egg whites into the batter.

Now, on the bright side... I managed to control the oven temperature spikes and the cakes didn't burn!

(please forgive the terrible photos in this blog going forward. My computer is sucking so much ass these days, I can't be bothered to give a crap about photography.)

On the cloudy side, the aforementioned egg/mixing issues seem to have resulted in a texture fail. These things had the consistency of pound cake, which I have a feeling wasn't what the recipe author intended?

I forgot to take a picture of the completed cake, before I started hacking it up. Oops!

So, aside from my failures, what was the verdict? A solid "meh." The flavour of the cake was interesting (it really did taste like champagne, in a decent way), but a little boring. The icing, on the other hand, was pretty gross. It was basically just butter, icing sugar, and a smidge of champagne... I mean, maybe I don't have the most sophisticated palate, but it ended up just tasting like tooth-achingly-sweet stale/flat champagne. And together with the cake it just gave this overall sort of... I don't know, yeasty kind of taste? Basically it just sort of felt like she removed "vanilla" from the ingredients and added "champagne" and frankly, vanilla would have been better.

So, oh well. At least I learned some things! I will master stiff peaks, eventually. In the meantime, I think I'm going to make something a little bit more yummy sounding... something with kahlua or irish cream. Although really I should probably make something with rum or cider, because that's what I have in the house. We'll see...

In other news, and without photographs, last night I made this banana bread. And it was UH-MAZING. Which is saying a lot, because it was kind of a using up leftovers, everything but the kitchen sink kind of thing. I had enough bananas to double the batch (and used 6 instead of 4), but then realized I didn't have enough butter (so mixed in some margarine - blech!) nor sour cream (so mixed in some plain yogurt). I was kind of grossing myself out when I was making it but it turned out fantastic. (I also mashed the bananas instead of slicing them... what kind of crack is that lady on?) I'd like to make it again with just butter and either only sour cream or maybe only greek yogurt? Yum.

Well, it feels like I'm long overdue for a blog series which will later be deleted, lol.

Yesterday I picked up a most exciting wedding present:

This gift was far too generous, and so I've decided I must justify its purchase by immediately taking up baking as a hobby. Now, we'll see how this goes. I was a successful and adventurous baker in my youth, but I benefited greatly from the guidance of my mother and the quality of our amazing gas oven. Skills aside, the variable temperatures of my old apartment oven are a problem. And I know it's an amateur move to blame your tools but... okay, last night? I preheated my oven to 400 for about 20 minutes. The internal temperature never cracked 350. So I turned it up to 410 and what happened? It spiked up to 475 in about ten minutes flat. WTF oven, WTF.

Anyway. I will be baking. And probably burning. And I'm not committed enough to this project to start a cooking blog or anything, so I thought I'd post it up here for a few people who actually know me IRL.

For my first attempts, I'm inspired to finally crack this cookbook, which was given to me by my brother last Christmas:

There are a number of particularly drool-worthy recipes in this book, although they do require a significant investment in alcohol, which isn't cheap. So my plan is to start with what I have on-hand, leftover from the wedding... the Champagne layer cake. It actually appears to be one of the most simple recipes in the book. But lemme tell ya, there are some yummy looking recipes in here. Pineapple Tequila Upsidedown Cake? Nightcap Tart (chocolate cream pie but with kahlua)? Limoncello Poppy Seed cookies? Pistachio-Coconut Madeleines? OMFG.

Look, I'm not Julie or Julia, but I do like me some sugar. Here's hoping these are as good as they sound, and I can manage to produce them without burning the house down.

Do you ever wish you had a blog that wasn't read by anyone you knew in real life? Or... do you maintain one?

Sometimes I feel so crippled writing when people I know are reading... I'm so afraid of conflict and of disagreeing with people I know that I don't always write when I know what I have to say is controversial. Because I tend to like the people who know about my blogs and I don't want to spend time debating heated topics, lest those heated feelings about the topic at hand turn into heated feelings about each other.

But what's the point in writing if nobody's reading? Because at this stage in my life, I doubt my ability to write anything coherent/compelling enough to inspire return readership from people who don't actually know me. And shouting my opinions into a void seems... meh.

omg... Hush Puppies redesigned my boot! It's smooth leather instead of suede, and a tiny bit taller, but otherwise it's essentially the same. (Most importantly: waterproof!)

It's still kind of expensive, but considering how I wore my last pair into the ground, I think it would be a good investment. Hmm.

You know these boots? The ones that every single well-dressed girl in Vancouver seems to wear as the trendy version of gumboots?

Dude... they're A HUNDRED AND FIFTY DOLLARS.

OMGWTFBBQ? Who spends a hundred and fifty dollars on gumboots? Are they lined in lambskin and goretex or something? I'm so confused. (This reveals how out of touch I've been with shopping lately.)

The mind. It boggles.

Just when I thought I would be totally happy staying frugal, my beloved waterproof boots finally kicked the bucket. I've been managing to keep the zipper from breaking completely, but as of today the poor old soles have separated just enough to allow the water to seep in. I had cold, cold feet on the walk home today.

And because I'm stupid-picky, and anti-fake-leather, I've been having a bitch of a time finding anything I liked the look of and wanted to buy. In fact, the only boot I've found in the past year that I actually liked was this one:

(Although at this point what fashion sense I have is a bit irrelevant because I'm too cheap to buy the clothes I really want to most of the time. But footwear is important, especially if you're not buying many pairs, because you wear it constantly and it affects your mood, your health, and your appearance.)

I did receive a rather large and unexpected monetary gift for my birthday yesterday... but I was responsible and deposited it directly onto my student loan. One day, though, a pair of Fryes will be mine. One day.

Anyway, I'm going to have to solve this boot problem before too long, considering how the winter weather is shaping up so far.

This weekend was supposed to be a "hermit up and do homework" weekend... which then turned into a "oops, we made plans months ago and forgot" weekend... and has now turned into an "emergency trip to Victoria" weekend because my very good friend's baby is very, very sick and in the pediatric ICU. And also, it's his big sister's 5th birthday and her Mama and brother can't be at her party. Boo!

So the homework schedule may get pushed by a day or two, but I think for good reason, right? Hopefully I'll get lots done on the ferry :)

I just want baby to get better. Poor little guy.

Just on the off-chance anyone is actually interested... I'm reviving my tumblr. It's like a scrapbook of things I find inspiring and beautiful. (Your mileage may vary.) My internet happy place. (Well, second to all the kitten crap.) 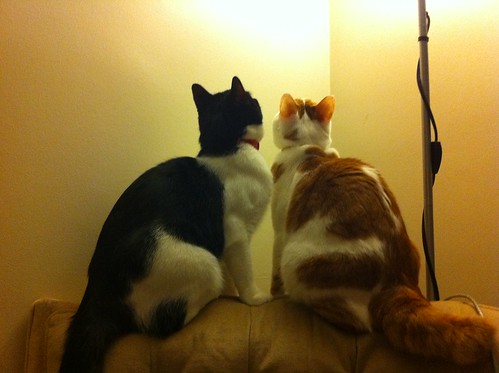 Today was a big day without much homework in it. Dammit.

On the other hand... it was a day in which we slept in, and did many loads of laundry, and got rid of many pieces of furniture (via craigslist), and did some awesome Christmas shopping (homemade gifts, coming soon), and took care of a bunch of house stuff. House stuff which includes Alex making a giant homemade kitty tree extension out of plumbing pipe and twine. I love that man.

I've been trying really hard not only to keep this place relatively clean but also to perhaps put a little more love into it. I don't have the energy or the money to "decorate" exactly, but just re-hanging some photos and putting up some mirrors where our "headboard" should be (if we had a decent bed, heh) and stuff like that.

We recently inherited an old (but awesome) dining room set. I'm so excited to have A) a table that doesn't require a tablecloth (our old one was unfinished and horribly stained) and B) chairs that match said table. It came from a smoker's home, but luckily we still have a huge amount of upholstery fabric that was originally intended to be a slipcover for a shitty old sofa that we got rid of (thank God, I hated that thing.) As part of the Christmas shopping trip I bought some foam so I can completely replace everything on these chairs and have them not smell. And yay Christmas because it was a 50% off pre-Christmas sale. Good thing - foam is fucking expensive! The thickness I wanted was $43 per metre regular price! WTF? (Given, this is Fabricland, where everything is overpriced and then they have an "OMG! 50% off everything!" sale about once every month or two. But I digress.) So I went with something thinner, needless to say.

Anyway. I'm actually halfway to being ready for my first midterm, so hopefully tomorrow I'll get that done. Well, not hopefully, I will. I'm actually really glad this course is going to go by so quickly. I can't wait to just enjoy my spare time again. And do crafts. I miss crafts :D
Collapse